✨✨✨ We review games after they're long irrelevant ✨✨✨ 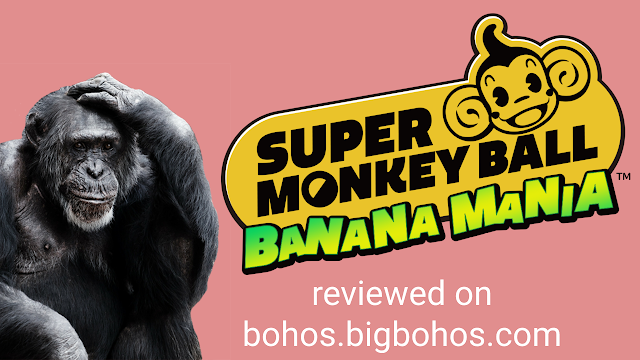 I actually got this game when it came out back in October, and I thought it sucked. I finally decided to come around and finish it just so that I could say I did beat the game, and I decided I could write a review on it, since I had a lot of opinions on it. But enough with the monkey business, let's just get into the review.

Super Monkey Ball Banana Mania is not too great if you were to ask me. It's sort of like the first 2 Super Monkey Ball games in its basic gameplay, but with the addition of some new levels and a couple extra things. This may sound awesome to some people, but to me, this doesn't make up for a bunch of issues with the game. I don't really know how else to format this, so I will just be listing out some of the bigger problems I have with the game.

I am quite unsure why, but for some reason, the newer Monkey Ball games have insisted on adding jumping as a mechanic. If levels can be designed around jumps, then I don't really have any issue with jumping being in the game, but Banana Mania's levels seem to all be designed to be played without the jump. This makes the jump toggle a pretty silly addition, especially when it is a feature that has to be unlocked through the in-game store. Obviously, it is still optional, which is pretty respectable.

One of the biggest issues I have with the Super Monkey Ball games altogether is the camera. It can be quite hard to program a good camera in these types of games I'm sure, but I feel like to a certain extent, just a stationary camera would work even better. While the camera in Banana Mania might be better than other Monkey Ball games, it still isn't very good. Some potential improvements that could be made to the camera would be the ability to turn off auto-movement, and making the manual camera movement more precise.

Helper Mode is a weird addition that you can turn on in the pause menu. It lets you slow down time, shows you a path to get to the goal, and doubles your time limit. It's sort of a weird thing to have, and makes me think the devs were unsure whether to make the game a difficult precision platformer or a baby's banana bonanza. I guess they wanted it to be both, but in that case, it is a bit weird that the prompt for Helper Mode only shows up once. I feel like having a demonstration be available to watch would be a lot more useful than Helper Mode, and it wouldn't remove any sense of accomplishment the player may feel for beating a level.

You can literally just skip levels if you want to. There's basically no consequence in skipping a level, so it really provides nothing to the game. You could theoretically beat the main story without even playing a single level, which is really a bit concerning. What do you gain from skipping levels? Getting achievements faster and getting to see the cutscenes with less effort? It can be nice to skip a level that's giving you trouble I guess, but there has got to be a better solution than just letting you pick the "Mark as Complete" option in the pause menu.

While I may be giving the game a bad rep, I do think it succeeds in many other ways. Mainly in regards to the amount of content that's in the game. There's a lot to do in this game. In addition to the main story, you can play through all the levels from Super Monkey Ball 1 and 2, as well as some bonus modes (which I can't help but notice reuse stages...) There's also a bunch of bonus game modes, like "Monkey Billiards" and "Monkey Race," which are fun, and I imagine being a good party activity (if anyone reading this is getting invited to any parties, that is.)
There's also a ton of unlockables, with certain alternate costumes being very cool. I especially like Agent Baby, although YanYan is my favorite character.

Overall, I don't think the amount of content really makes up for the rest of the issues, especially if you already have the original 2 Monkey Ball games, and I think I'll still be deleting the game off my PC for the extra space.
- morsh
review