REVIEW: Marble it Up! 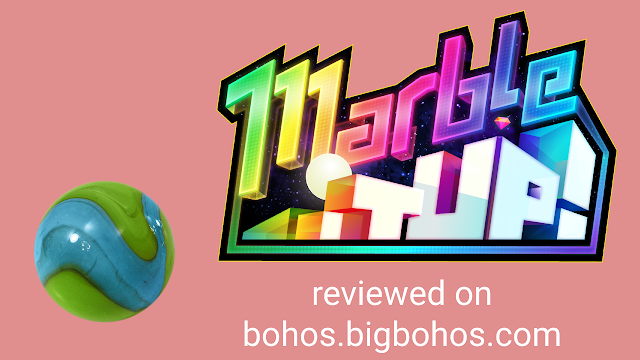 Marbles are an essential piece of entertainment technology (if we want to go back to the 1920s), up there with such classics as jacks and draughts (which you would call checkers if you're normal.) It was really only a matter of time until two cutting edge pieces of technology were put together. Those being marbles and video games. That is of course a joke, as Marble it Up is not the first marble themed video game out there, with games such as Marble Blaster dating all the way back to the previous era of 2002.

The gameplay of Marble it Up consists of rolling around and collecting gems as quickly as you can while avoiding the vast array of obstacular roadblocks. You can collect several powerups on your marble journey which will aid you in ways such as making you go fast, slow your falling speed, or allow you to jump high to help your marble friends.

If you really enjoy the gameplay of any of the other marble games, you'll probably get quite the kick out of this game. It is quite possibly one of the best marble simulations I have seen. You may be wondering what makes this game any different from all the others, however. I don't know what's different between this game and Marble Blast Ultra, for instance. All I know is that you can actually purchase Marble it Up on the Steam Powered Store, which is a step up from Marble Blast Ultra, which you can download for free on Softipedia (which is probably filled with malicious software, aka malware.)

Marble it Up has a cool ability to keep me hooked through its very mighty selection of unlockables. If you want to 100% this game, you'll be at it for a dang while, and seeing how little content there really is to the base game, I wouldn't blame you for at least trying.

There are 6 marble worlds to blast through, each hosting 10 marble levels of progressively increasing marble difficulty. The levels are all quite unique and have a nice blend of gem collection, speedrunning, and precision platforming. Towards the end, I did start to have some problems beating the levels, but what Big Boho would I be if I didn't beat the damn game. After 60 levels of variable levels of difficulty, I have beaten this game. I doubt I will be going for a 100% playthrough, but beating every level seems like enough for me.

I suppose I should get into whether I would recommend this game. I'm not really sure. It is a lot of fun, and I like the developers a lot, but I think $20 is a bit steep, especially seeing how little content there really is in the base game. This issue isn't as bad as other games, since there is Steam Workshop support for custom levels. I think it might be best to wait for the game to be on sale if you're interested, unless you're perfectly fine with paying 20 shiny doubloons for this game.