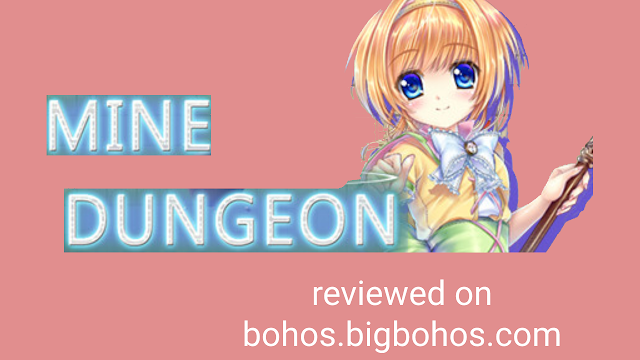 Minesweeper is a video game that is pretty close to perfect, at least to the right person. If you find immense pleasure from looking at spreadsheets all day, then you are probably the type of uncleansed soul to play Minesweeper.

Knowing Minesweeper's demographics, it shouldn't be much of a surprise that someone decided it would be a good idea to add an anime girl as the main (and only) character and call it a new game. Mine Dungeon is pretty much that, but there are other differences between it and the original game of Minesweeper, such as it being played in a third person perspective, and requires you to move along the board of which you are sweeping.

The main character of the game* is an anime girl, who holds some sort of scythe or other similarly shaped oblong object, and she is the main difference between Mine Dungeon and Minesweeper. Other differences mainly take the form of obstacles, such as roadblocks that you must destroy to pass, dastardly enemies that you must avoid touching, or creatures which temporarily cover certain spaces, hiding the number on the space.

*Sidenote: The main/player character is never given a name as far as I remember, and is only referred to as "a cute character" on the game's Steam page, so from here, I'll just be calling them "the character" or something along those lines. Merci beacoup!

The obstacles pose pretty little threat to the gameplay, and usually aren't more than minor annoyances. My experience with most of the levels were either something like beating them instantly, or resetting the level until the RNG gave me a layout that didn't force me to guess where the mines were.

In regards to the game's aesthetic, I did really enjoy the low-res PS1 models for the character and obstacles. The music served its purpose but not really much else, and it wasn't anything particularly catchy or groundbreaking. The sound effects were of similar quality. Ultimately, the aesthetics were on par with the gameplay for me.

This game isn't really anything I would particularly recommend to anyone other than weird internet creeps. I'm sure there are non-deranged people who would enjoy this game, but the group would be so small, you could probably fit them in a single row of middle school gym bleachers.

While this all seems a little bit mean, the studio has made a sequel to this game which I regret to say I haven't played, but I hear is much better. I may have to play through it and write a review of that one, but we will see.