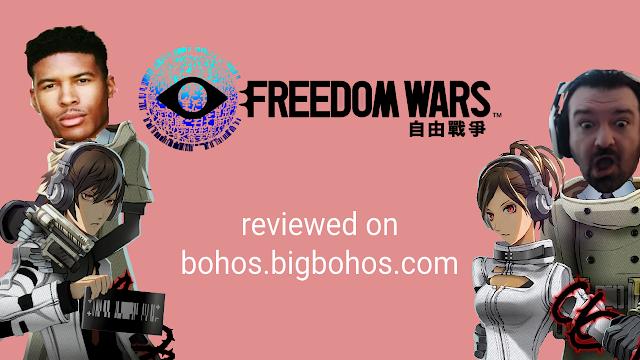 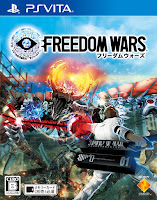 Freedom Wars is a game about going to prison. Set in the distant future in a world deprived of precious natural resources, all remaining traces of human civilization are splintered into Panopticons, penal city states that value the effective pooling and rationing of resources to optimize the survival and enjoyment of their citizens. To this end, any citizens deemed noncontributory wastes of space or lacking value to the state are punished harshly with the title of "Sinner," receiving sentences ranging up to over a million years of imprisonment for infractions even as light as memory loss, which is how you, the player, come to find yourself in My Boy Ronny's Place after getting joint-snorkeled during the opening mission. 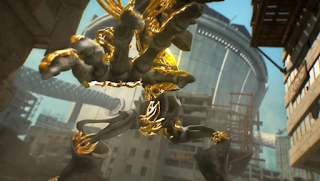 POV: You're in the process of getting joint-snorkeled

To pay off your battle pass (no, you can't change the clock) and reclaim your freedom, you must take part in operations with other Sinners to destroy giant robots known as Abductors that capture civilians for assimilation into rival Panopticons, among other types of objectives. The gameplay structure follows a similar route to the likes of the Monster Hunter series, God Eater, and Big Rigs Over the Road Racing, the latter of which being the gold standard that all media should be judged upon. By completing operations and collecting the resources you are entitled to keep for your CODE level, you will reduce your sentence and gain access to better weapons, munitions, clothes, augmentations, and entitlement points, which can be used to purchase freedoms such as permission to converse with the opposite gender or run for more than 5 seconds in your cell without having your sentence extended by your surveillance cyborg. 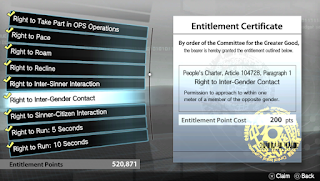 A few of the entitlements you can earn

In addition to having access to more weapons than an average prisoner should ever be trusted with, you also have the ability to call a special thorn from your arm that can be used to drag down and trip Abductors or quickly traverse the battlefield by latching onto surfaces or enemies within reach. Depending on the variant you choose for your loadout, the thorn can also be charged to heal, boost the defense of yourself and your allies or trap Abductors and hostile Sinners, effectively outlining the healer, tank, and DPS roles that are commonplace in this game's genre. However, later in the game, certain options will become available that can perform the same functions as the thorn, as, for instance, painkillers can boost your defense as well as the shielding thorn and the shock element can stun Abductors like the binding thorn. Personally, I didn't find myself using the drag down or charge moves of the binding and healer thorns as much since the movement capabilities of the latching mechanic were often more potent and fun to use in order to maintain an evasive presence while attacking, but this feature by no means made the game an easy trip. 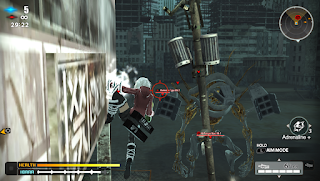 Clinging to a wall 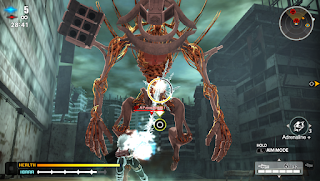 Attempting to drag down an Abductor 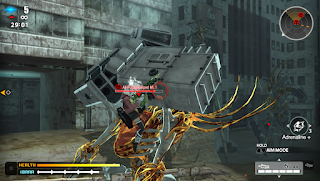 Shooting while attached to an Abductor

Enemies can often kill you in one or a few hits, and though you have a few respawns at your disposal, getting in a bad position or failing to destroy the weapons and artillery carried by Abductors can spell disaster for you and your team, which is often the case for special operations and retributions, where you must go god mode cracked or you will die within the first few minutes or get timed out. For those and some of the later operations, it's highly recommended to have max level weapons and the appropriate augmentations to succeed, but unfortunately, acquiring the best versions of your weapons is far more tedious than it really should be. Weapons have randomly generated stats, growth rates, and modules that have a very significant effect on their strength. The former two can be controlled to an extent by modifying existing weapons with others in your arsenal, but in order to complete the process, you must wait upwards of 10 minutes for your facilities to create a finished product, which, more often than not, will have undesirable negative effect modules that limit the capabilities of your chosen weapon. This is especially annoying if you already have a surplus of the required materials and want to farm multiple of the same weapon for the best stats. However, you can use special resources to get 1 specific module that you may want, enlist citizens to speed up the process, remove undesired modules for an expensive sum of 5000 entitlement points upon reaching CODE 6, or maintain existing ones after a production cycle with C6 Benzotriyne, though you can always get unlucky and end up having those resources wasted if your weapon doesn't come out to lowtiergod standards. 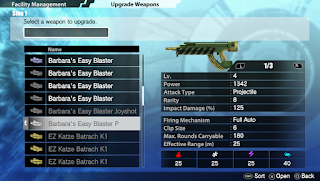 I was very lucky for this to only take a couple hours to get
the right modules, growth category, modules, and rarity

Doing this process optimally isn't necessary to complete the main story operations, but the fact it's there at all is more of a hindrance to your character's progression than it is a gateway to loadout variety, a factor that is already accomplished by the distinctions of each weapon in the categories of assault, portable artillery, autocannons, light melee, heavy melee, and polearms. Sniper rifles, flamethrowers, grenades launchers, homing missiles, javelins, knives, web cannons, energy rifles and big blasters are just a few of the types of armaments at your disposal, and all of them have different advantages; some are better for taking out Sinners or attacking from a long distance while others are more suited for disabling Abductors or increasing the survivability of the user. In the case of melee, different movesets exist for all of the weapons in the category and vary in the possible charge moves that can be performed. You can even latch onto an Abductor to sever its weapons off, however you can also destroy those parts with enough damage from ranged weapons if you prefer. 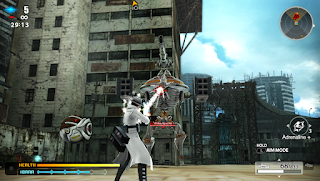 Stealing the Donkey Kong Jr. board

When you're not out completing operations, you can access the rest of the prison to talk to other citizens and Sinners to trade items and progress the story. Much of hub world is pretty much just the prison, although you can take a small risk by accessing restricted areas for resources and stealth sections. If you get caught, you'll get a couple hundred years added to your sentence, which is a small price to pay when most operations are worth at least that amount or more upon completion. Aside from that, there isn't a whole lot to do outside of the story and discretionary operations. Unfortunately, following the trend of other Vita games as of late, you can only do these operations solo, as the online servers were shut down in December of last year. It's honestly a shame since this game was designed with co-op and PVP in mind, as there was once a system that ranked the total value of your chosen Panopticon against others in the world. You could donate resources or invade Panopticons to affect the rankings of the leaderboard, which would grant rewards based on your performance, giving an incentive support your respective community. Technically, you can still play online in ad hoc mode using XLink Kai, but the state of the game's community is quite barren. 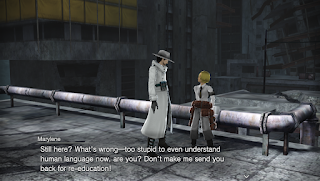 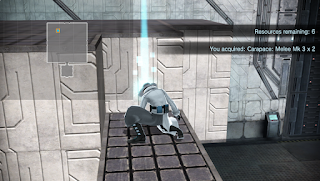 Overall, if you like 3rd person action/shooting games to a decent capacity, this game is worth a try if you have a Vita. The options available to take down its challenges are all viable and satisfying to use, and there's enough depth to be found within its combat to keep you busy mastering the many different mechanics and learning the behaviors of the Abductors. The flaws it does have mostly come in limitations of certain aspects of its presentation, as frame drops and jank with the enemy collision are somewhat common in operations with large maps or many Abductors. In addition, the post-game is a very underwhelming, as there are very few extra operations to do, weapon modifying becomes very tedious, and a large aspect of the story ends unresolved. However, I still enjoyed my time with this game, even though its flaws can be quite glaring at times. If you're not already interested in the genre or are the type to get into min-maxing though, it may frustrate you at some points.

So anyway, here's my verdict:

Frivolous acquisition and consumption of illicit

reading material is deemed a violation of a

citizen's obligation to contribute to the

needs of the state.

By order of the Committee for the Greater Good