Battlefield 2042 (and its stumbles) 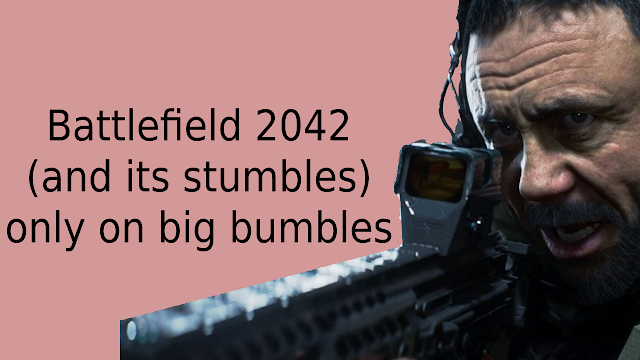 Battlefield is a pretty popular franchise, and it has for a while, at least as far as I can tell with my own fickle uninformed experiences. I personally never really played too much Battlefield, but I do remember playing the Battlefield 1 beta with some friends and observing my friends playing Battlefield 4 once or twice.

All of this to say, it seems like the internet is dogpiling on the newest release in the Battlefield franchise. Checking through a number of steam reviews, it seems like longtime fans are pretty upset with Battlefield 2042's release. Most of the reviews are negative. There are a couple of positive reviews, but none of them actually really list anything good about the game other than "its fun" or something else within that ballpark.

Note: If you want a crazy sperg-like amount of detail as to why people don't like the game, then check out the most helpful steam review. Otherwise, just keep reading this article on bohos.bigbohos.com

Most of the negative reviews mention some serious issues with bugs, lackluster content, and general quality of life issues. This leads me to believe that this game is probably not a very worthwhile purchase, but I'm not really here to convince anyone of that. Most people probably already understand that many new games are doing pretty poorly due to rushed development and greedy CEOs. Everyone already knows all of this, so I won't be a redditer about it.

It may strike some readers as a bit of a concern to hear that a video game could turn out to be bad. I understand this notion, and I too wish that every video game was the best experience I ever did have, but sometimes you just gotta be realistic. Nobody's gonna give you a dollar on this one. If you like Haze (2008), then go ahead and play Haze (2008). just understand that other people are gonna look at you like you're an Incredible Crew cast member during the infamous Bad Luck Rap.
You do you. I do crack.
- morsh
(This article was requested by my buddy/pal Distrezzed, and for that I present thee a shout out)
battlefield gamers gaming