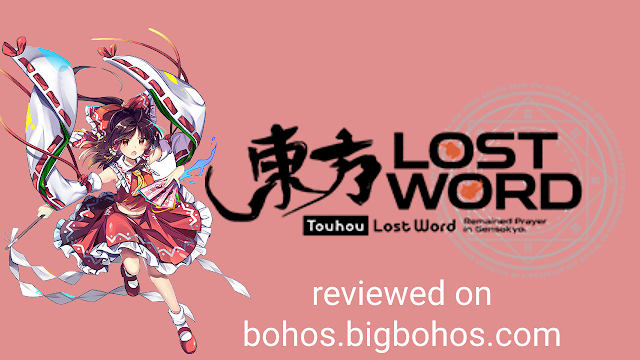 Touhou has always been good at sucking the precious sheckles out of your pockets, and it looks like they're back at it...

This time with a new GACHA GAME


Touhou LostWord is a new Touhou-based gacha RPG for Android and iOS that released on May 7, 2021, for global servers, where instead of shooting so many bullets the number of on-screen particles rivals a beach, combat is based in a 3 v 3 scenario between your party of waifus and enemy waifus (or monsters).


Made by GOOD SMILE COMPANY, Inc, who made the decently successful, but kinda boring Grand Summoners, have stepped up their game for a slightly more in-depth turn-based RPG.

The combat, which seems to be the main focus of the game, consists of forming a party of 6, with a troop layout menu that looks oddly similar to Azur Lane's. Of these 6, the front 3 party members will be the ones attacking enemies, with the back 3 being able to switch positions with the frontline to attack. There is a catch to this though, as each member of the frontline and backline can only be switched with the corresponding party member in front of/behind them.
This limits player flexibility in actual combat, so careful planning is absolutely necessary when making a party. Speaking of which, what makes up a party?
Characters, which are referred to as "Friends" in this game, each consist of varying attributes, abilities, and special moves, which requires careful analysis to fully comprehend. Characters may specialize in the following attributes of Attack, Defense, Technical (?), Healing, Debuffs, and Destruction (???), with each attribute representing a different stat loadout for a character.
To be a bit more quirky like my middle school self, instead of using typical naming conventions for stats, characters use Yin and Yang type attack and defense, which seem no different from a standard RPG's typical Physical and Magical attack/defense stats.

The actual fights are a far cry from the gameplay of the original Touhou games, but they still seem to go back to their roots in a manner similar to that of Imagine Dragons in their hit 2015 single, "Rock Bottom." It stays true to its source material in a way which is purely stylistic. In all fairness, it seems really hard to adapt a bullet hell into an RPG format (given they didn't even really need to in the first place.)

Now the story is actually very engaging. It is so engaging that the devs decided to put a skip button for every single scene of dialogue. I could say more, but we would all be lying to ourselves if we said that you care about the story in this gacha game.

Here's the question of the day: is the game fun?

The game gets pretty repetitive and incredibly boring if you just stick with the main story, as these gacha games tend to. If you really like turn-based RPGs for whatever reason (possibly because you're a nerd) then you're also out of luck, since (to the best of my collection) there is nothing in terms of online features yet.