Why Zoom Sucks and Why We Shouldn't Use It

WELCOME TO OUR FIRST INFOWARS COLLAB

Zoom, a video communication software recent popularized due to COVID-19, has always been a pain in the ass to deal with, as having school over such a laggy platform is problematic, but everyone knows about those minor issues. I'm here to expose the less well-known issues about this San Jose-based piece of shit. 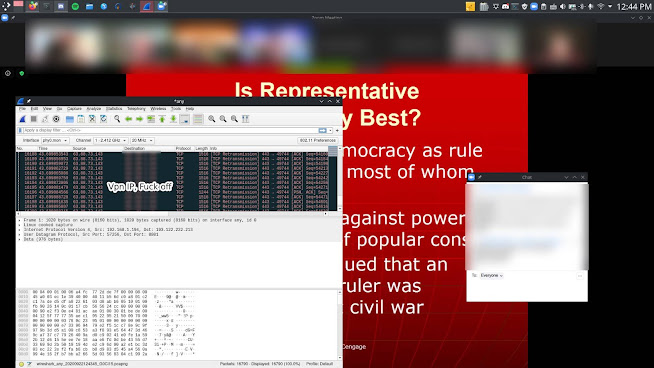 As some of y'all may know, part of Zoom's workforce is based in China. Having that fact in mind, and being bored out of my mind from my Government class depicted above, I opened up Wireshark to see what type of data is being send in and out of my PC to Zoom. As I'm analyzing what packets are being sent in and out, with the occasional Google bot showing up because I have Youtube opened in the background, I was shocked to see my Wireshark flood with bad TCP protocols. You don't necessarily need to know what that means, but for simplicity, just remember that "black = bad" in a non-racist way. 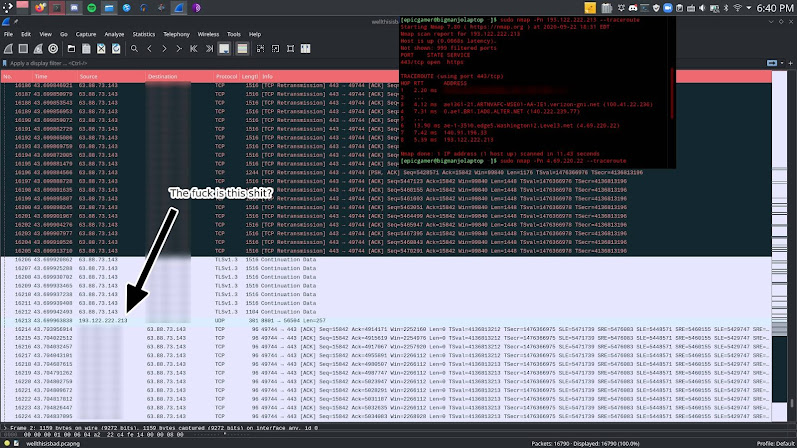 With the IPs of potential hackers in my bag, I prepare myself for the worst, and begin my usual "fuck off" routine of a traceroute using Nmap, and tracking their potential physical location with  https://latlong.net. I check our first address, 63.88.73.143, only to find jack shit. But, I noticed something odd. A new IP was sending packets in and out of my client. I run the traceroute and notice something fucking weird. Something affectionately named "ae-1-3510.edge5.Washington12.Level3.net (4.69.220.22)". First thoughts are along the lines of "Jesus this looks fake as shit, lol", but I decide to check out the IP, and run another traceroute. 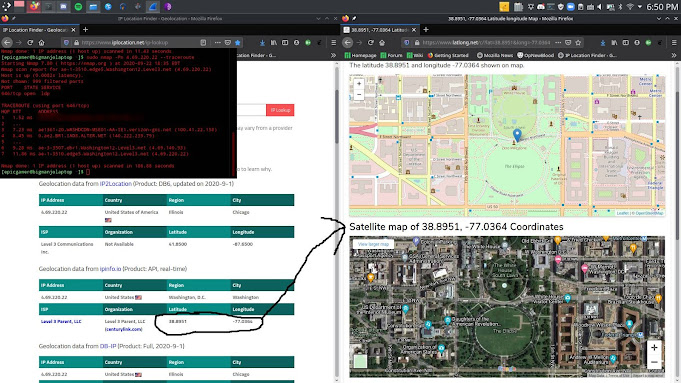 Traceroute leads to nothing but more fake-ass sounding government bots, so I decide its time to just IP Locate this shit. To my surprise, our Zoom call had data being sent out to the motherfucking White House. President Trump himself could be listening our Government class talk about the legitimacy of the raids in Iraq and we would never know. Zoom, those fucking sellouts, has the government listening in on us!

Of course, I am aware only one example isn't enough, so a "helper" gladly volunteered himself to conduct this experiment on his Western Civilization 101 class at NOVA. Following the process I did, but without Youtube open in the background, his findings were similar to mine. We found two concerning IPs, 64.125.25.103 and 216.200.223.94. The odd thing about that is, they both tracked to the exact same location.

Odd thing about this particular location, aside from both IPs tracking to over this conspicuous body of water, is that this place, Cheney Wildlife Area, always closes from September 15, a mere week ago, to March 15th, every single year, without exception. With all of that time, they could easily maintain an underwater base of catastrophic proportions, and could easily contain a nuke there or something! What the fuck is Zoom doing with our video conferences and placing them in potential underwater nuke storehouse!

If I have anything to end this article off on, its that all data ends up in China anyway, so do yourself a favor and start selling it directly.

As a side note, my helper's computer was being fucked with the whole time we were tracking this fucking Kansas Reservoir Base, so take that as you will. I haven't heard from him since 6:27pm, so please send him a prayer.