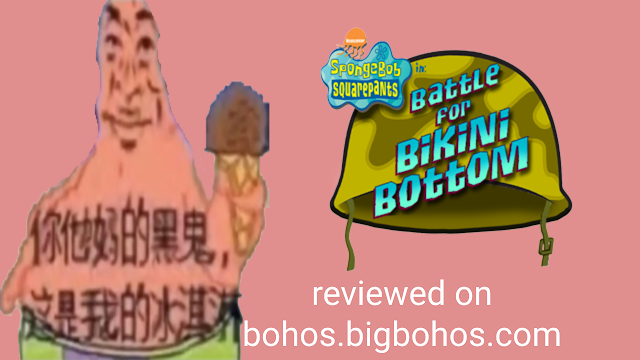 Spongebob Squarepants: Battle for Bikini Bottom is an action-adventure platforming game released on October 3, 2003 for the Xbox, Playstation 2, Gamecube, Game Boy Advance, and Windows PC. The base plot revolves around defeating Plankton's rogue army of robots intended to screw over the Krusty Krab, but are now running amok among the residents of Bikini Bottom. Also note that this will exclude a discussion on the GBA release, as it is drastically different compared to the other releases, and I have not played it.

The game consists of collecting Golden Spatulas by subduing mechanical freaks to further progress within the game for the sake of subduing even more freaks. With each new area unlocked, the player is treated to a platformer level with multiple enemies to screw, and some Spatulas to earn. Due to the lack of bosses until the end of the fourth level, the game may feel somewhat tedious due to the need to search for items and kill constant waves of robots. On the bright side, the game is mind-numbing enough to make this feel like a very short amount of time, usually due to the surprisingly fast combat and easy platforming.

Combat consists mostly of spamming some melee moves and ranged moves all at once to clear multiple enemies, which makes the game feel fast and easy, as expected of a kid's game. Each playable character has their own special movesets, but all consist of the basic melee and ranged attacks, with varying attack speeds to make each character have its own distinct playstyle, with Spongebob being the bubble spammer, Patrick the tank, and Sandy the kick spammer. With the boss fights, kids are treated to easily-readable patterns and more platforming while they polish their spamming skills to off a boss. Surprisingly, the boss fights feel tense due to their enormous healthbars and devastating attacks that overcome the spamming strat by a fair bit, forcing kids to think for just enough to completely decimate each boss. There's also the soundtrack that adds to the atmosphere of the boss fights, but not to anything else.

The soundtrack in this game is incredibly simplistic, with each area of the game having its own theme befitting of each area. The constant looping of each song, combined with the extended duration of stay in each area, can make the songs feel grating at times, making one sense a feeling of relief immediately after leaving an area into a new one with a new soundtrack. 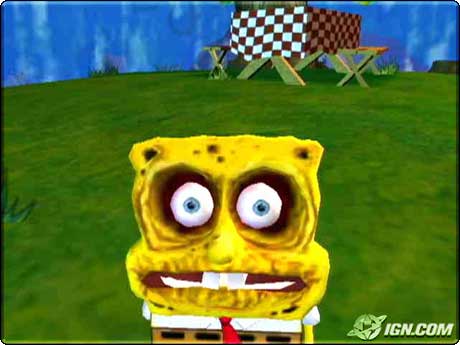 The graphics, as one can tell, are decent at best when compared to modern games with better ways to make graphics, such as cell shading and ray tracing. At the time, the graphics were definitely better than some of the other 3D games consoles had to offer, such as Shrek: The Game. There is the occasional problem when an item doesn't look like a collectible item and part of the background setpiece, but that's minor compared to some other issues, such as clipping through walls or other such occasional bugs.

Overall, SSBBB is a nostalgic game in the hearts of many a Spongebob fan. It is not the best game in the world, but it was good enough to receive a remake, a speedrunning community, and love and support from various people. On a critical level, though, it suffers from various flaws in quality, making this a lackluster experience that I wouldn't fully recommend for anyone over the age of 8 who isn't speedrunning the game.

On the subject of the remake coming out in 96 hours, they seemingly improved the graphics, soundtrack, and added tons of new content, including multiplayer mode with a new boss, so I'll be sure to review that once it comes out.