After many months of revisions and new additions, I am ready to announce that the official complete version of Harambe Vs. Capcom Deluxe is now ready to be released worldwide! The game features familiar characters from Street Fighter, Jojo's Bizarre Adventure, Akatsuki Blitzkampf, and the Cincinnati Zoo, and all are raring to battle in a bodacious display of fast-paced, obscene action! 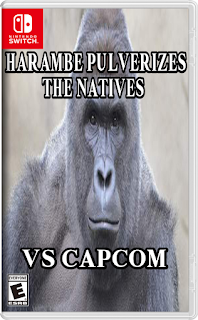 Harambe Vs. Capcom Deluxe is a revised version of the popular action fighting and ethereal ASMR mediation video game Harambe Vs. Capcom. It was modified by KappASA and play tested by numerous acquaintances. The game was originally teased at E3 1996, but was postponed due to an E. Coli 0157 outbreak wrought by unpasteurized apple juice. Its gameplay is notable for its unique combat and brilliant roster of characters.
Initial release date: June 26, 2020
Series: Harambe's Euphoric Crusade
Developer: Harambe
Designer: Harambe
Platform: Harambe OS
Publishers: T Dub Back Rub Studios

So what are you waiting for? No further elucidation is needed! Go download the game!
Download Link: https://drive.google.com/drive/folders/1sveEK-s7YpAZd1ylNbAC4p0XC-U2dgpq?usp=sharing